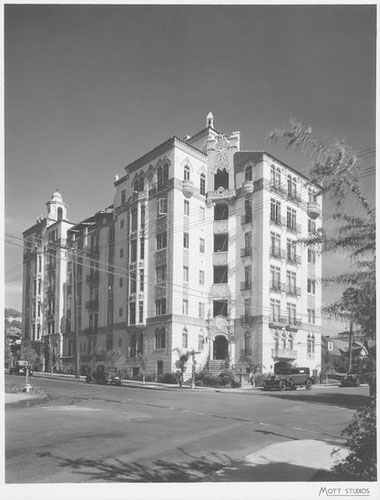 Beverly Press updates the current status of renovations to the El Mirador, a seven-story apartment building on Fountain Avenue at Sweetzer. The city designated the building as a cultural resource in 1992. It has been closed since 2010.

The article includes a quote from WHPA Board Pres. Victor Olmenczenko:

“The El Mirador is an architectural treasure whose current rehabilitation and restoration bode well for historic preservation in West Hollywood. For over 90 years, the El Mirador has caught the eyes of both tourists and residents alike as they travel along Fountain Avenue. The building’s ornate ‘Churrigueresque’ Spanish Colonial Revival style is quite rare nowadays … The El Mirador could garner even additional recognition at the state and national levels, which if achieved, could also result in some fine tax benefits.”

Jerome Nash, the owner the building, has yet to say whether he intends to convert El Mirador into an urban inn or condominiums or resume renting the its 32 units.

Renovations are expected to be complete in early 2021.