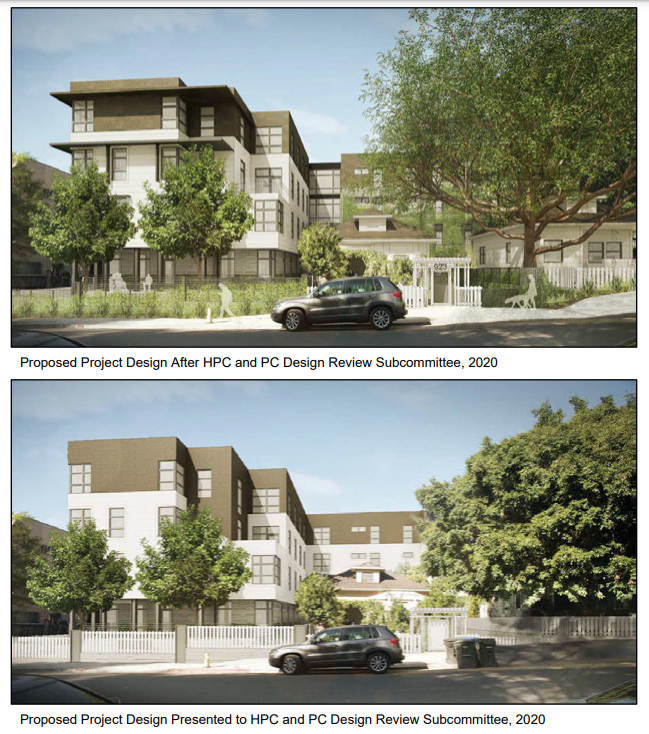 1. The proposed development does not meet the National Park Service’s guidelines on New Construction within the Boundaries of Historic Properties — not only alteration of historic buildings must adhere to applicable preservation standards but new construction should not be permitted on the same property if the new construction would obscure, damage, or destroy character-defining features of the building or the site; such new construction must be “subordinate” to the designated buildings; furthermore a project should not remove a “landscape feature that is important in defining the historic character of the setting” such as the vegetation and open space that have been present on the property since the days of Old Sherman.

2. The developer argues that the concept and usage of the term “subordinate” appeared in revised 2017 federal guidelines AFTER the project application was deemed complete by the city in 2016. However, the term “subordinate” merely reflects the original meaning of the standards. Before using the word “subordinate,” the federal standards provided that the environment surrounding a listed property also must be conserved as appropriate to retain the integrity of the property.

3. The Secretary of the Interior standards under which this project was deemed complete included “Rehabilitation as a Treatment, Standard 9” that says: “…related new construction will not destroy historic materials, features, and spatial relationships that characterize the property. The new work will be differentiated from the old and will be compatible with the historic materials, features, size, scale and proportion, and massing to protect the integrity of the property and its environment.” It’s important to note that the parcels of land upon which the two historic bungalows sit are themselves rare remaining examples of residential life on relatively large plots of undeveloped land that were typical in Old Sherman.
Some persons have noted that the WHPA supported city staff recommendations regarding The Factory/Robertson Lane and The French Market Place projects, and that this Palm Avenue project is similar. First, the WHPA considers every project that affects historic resources on its own merit, and not through precedent. Second, both Robertson Lane and French Market Place are large commercial projects on two of our major commercial thoroughfares, not on a small residential street like Palm Avenue. The comparison is false.

Furthermore, the City Architect and planning staff stated in a report for the July 9, 2020, meeting of the Planning Commission’s Design Review Subcommittee: “From a scale perspective, the building looms over the bungalows, mitigated in part by a step back element at the street facing front of the south leg. The form of the structure is a block mass and it is intended to serve as a backdrop to the historic bungalows.” [emphasis added] “Looms” and “a block mass” are not terms that instill confidence in the preservation community. Let’s preserve not only the historic structures themselves but also the last vestiges of the physical and spatial environment of Old Sherman. Please affirm the Historic Preservation Commission’s position, which did NOT support this ill-conceived project.