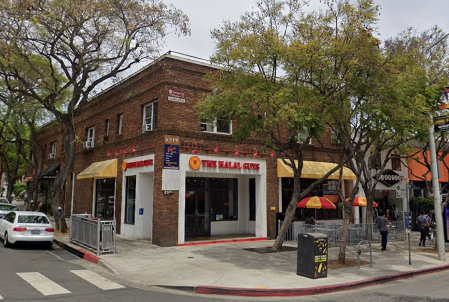 During this horrible pandemic when other LGBTQ+ entertainment venues and neighborhood-serving businesses have permanently closed, it’s good to know that Gym Sports Bar and Grill will soon be reopening at a new location in a building which has a place in West Hollywood’s cultural and architectural history. The West Hollywood Preservation Alliance (WHPA) offers the following observations for the Tuesday, March 9, Director’s meeting regarding Item 4.A. 8919 Santa Monica Boulevard (Gym Sports Bar & Grill). The meeting begins at 5 p.m. and can be accessed on Zoom; meeting ID:96166511208

1. The official address for this building, per County Assessor records, is 8917 Santa Monica Boulevard, with Assessor Parcel Number 4344-007-009. This mixed-used commercial building from 1927 is considered potentially historic on the city’s 2016 commercial survey, but nary a word appears in the staff report regarding its being a potential cultural resource.

2. Per the survey form, the building originally had two storefronts: “The two storefronts were originally separate but interior walls have been demolished to create one large space.” The western storefront now contains the recessed main entryway [that’s what appears to now be considered as 8919 SMB]. The eastern storefront has large fixed windows with no entryway [which probably was 8917 SMB in years past].

3. The commercial survey determined: “Based upon visual observation, the property retains all aspects of integrity from the period of significance; however, the integrity of design materials, and workmanship have been diminished by the alterations to the storefronts. The original storefronts openings have not been resized, but windows and doors have been replaced. Other apparent alterations visible from the public right-of-way include exposed seismic anchor plates and altered signage.”

4. Even with the changes noted above, the survey still assigned the building the Status Code 5S3 to signify that it “appears eligible for local listing or designation as an individual property through survey evaluation.”

1. The proposed project is being identified as 8919 SMB for the Director’s hearing. The city staff report makes no mention of the survey of potentially historic commercial buildings which identified the property’s address as 8917 SMB.

It is hoped that there is not a repeat of the situation that befell the historic property at 8001-8003 Santa Monica Boulevard/1105 N. Laurel Avenue in which character-defining features were obliterated as a result of mistaken addresses, and then the Historic Preservation Commission “delisted” the building from future consideration for historic designation.

2. WHPA believes the Historic Preservation Commission should be brought into the loop and that there should be a “Certificate of Appropriateness”—type review conducted before the new project is ultimately approved. Also, it would be good to know how the city’s contracted historic consultant – Chattel, Inc. – views the proposed new project and its impacts. The changes being proposed should not alter the building so much that any future effort to designate will be fruitless.

Going a step further into the realm of possibilities, here’s a scenario to consider:

Property Owner Monte Overstreet, Gym Sports Bar Operator Hunter Haliniak, Local Attorney Mark Lehman, Project Designers Neil Maass and Rogerio Carvalheiro, Structural Engineer Bob Onishi, and the West Hollywood Preservation Alliance join forces to fund and submit a nomination application to designate this outstanding historic building as an official local cultural resource in the City of West Hollywood. Such a nomination would still have to clear muster with city staff, the Historic Preservation Commission and the City Council, and support of community members would be all-important during this entire process.

With the popular Gym Sports Bar and Grill readying its return, the frosting on its menu would be serving the community from within a locally designated, landmarked historic property in the city’s Rainbow District. And as we all know, it takes a village to get a property designated.

This statement from the WHPA was also published on WEHOville.com.