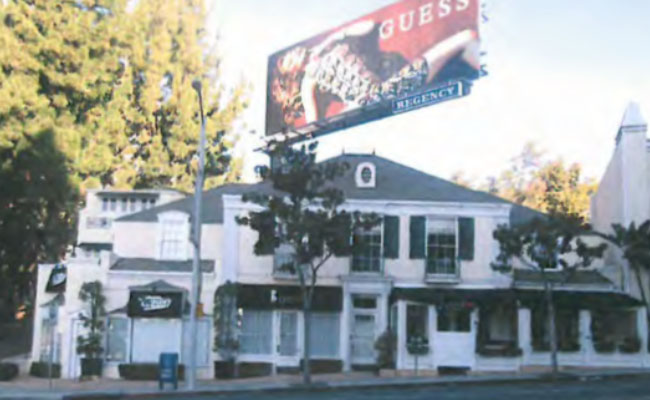 Prior to the Feb. 25, 2019, meeting of the West Hollywood Historic Preservation Commission PDF, the WHPA submitted the following statement:

The West Hollywood Preservation Alliance (WHPA) supports having the city’s Historic Preservation Commission recommend to the City Council that the property located at 8743 Sunset Boulevard be designated as a local cultural resource. Already deemed potentially eligible for local designation in the city’s survey of commercial buildings, this distinctive two-story property built in the Georgian Revival Style certainly meets municipal code criteria established for designation. Ample justification for designation is provided in the application prepared by Architectural Resources Group.

While the ARG application provides a fine case for the property meeting Criterion C (“It is identified with persons or events significant in local, state, or national history), the staff report does not recommend that the building be deemed a cultural resource under Criterion C. However, in the realm of labor history, this building housed the Screen Actors’ Guild from 1936-39 during which “the first-ever contract was executed between SAG and thirteen producers” in 1937. (ARG Report Page 17).

That report further states about the contract: “It guaranteed a minimum pay of $25 per day, $35 for stunts, and $5.50 for extras. Execution of a contract was heralded as a resounding win for SAG whose members had dedicated themselves to this cause for the past several years; it finally provided a sense of legitimacy to the nascent organization. SAG President, actor Robert Montgomery, declared that recognition of the Guild was ‘the victory of an ideal.’ Later that year, SAG extended its reach and opened its first branch office in New York.”

Additional noteworthy information about SAG’s activities during its tenure at 8743 Sunset Boulevard is available at this link.

The staff report on Page 7 says “… to meet Criterion C, the persons or events would have to meet a certain threshold to be deemed significant in relation to the building.” The WHPA looks forward to a full-throated discussion at the Historic Preservation Commission (HPC) hearing regarding exactly what these “certain thresholds” could be.

After this past January’s HPC recommendation to designate the historic Formosa Café on Santa Monica Boulevard, it is gratifying to see that, in this second month of the year, the community is already considering designation of yet another architecturally distinctive building — this time on Sunset Boulevard – that has played an important role in West Hollywood’s commercial development and in the entertainment industry. The WHPA thanks the property owner – Sunset Sherbourne Holdings, LLC – for submitting this nomination application.